Kamloops-North Thompson MLA Terry Lake announced on June 12, 2015 that the B.C. government is contributing $40,000 toward the cost of a new water park in Barriere.  “Combined with the generosity of the Lower North Thompson Community Forest Society (of $150,000) and the fundraising efforts of the community at large, we can now move forward with a grant application that requires matching funds – something we could not have done without Minister Lake’s efforts to procure today’s contribution from the province,” Mayor Virginia Smith said.

Click here for a link to the full announcement. 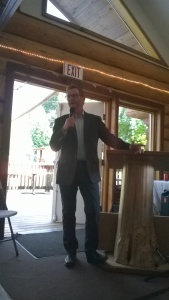 MLA Terry Lake reiterating the announcement at the Annual BC Community Forest Conference in Clearwater.